As of January 1, 2023 Robert Fraune took over the Business Unit Management of the agricultural electronics company Müller-Elektronik, succeeding the previous Managing Director Christian Müller, who is leaving the company after almost 18 years.

As the son of company founder Heinrich Müller, Christian Müller has been associated with the company since childhood. He joined the company in 2005 and, initially as Export Manager, was decisively responsible for the expansion of business relations to Eastern Europe, the USA and South America. When his father Heinrich Müller retired from management after more than 30 years, he handed over his position to Christian Müller. During his time as Managing Director, Christian Müller made a significant mark on the company and drove its expansion into one of the leading system providers for customized ISOBUS solutions for agricultural machinery manufacturers. “Robert Fraune will continue the success story of Müller-Elektronik. I am very pleased that a colleague with many years of experience is taking over the Business Unit Management. This shows that we offer interesting development potential in the company. I wish him all the best for his future tasks“, says Christian Müller.

Robert Fraune learned his trade from scratch at Müller-Elektronik. He started his career in 1989 as the company’s first apprentice. This was followed by positions in Customer Service up to and including head of the same, later he took over as Head of Product Management and became Division Manager for Sales, Service and Product Management. In the course of the takeover by the Trimble Group, his area of responsibility expanded again and Robert Fraune was responsible for the Worldwide Sales of Müller-Elektronik and Trimble products to OEM customers and headed Product Management at the locations in Germany and France.

Müller-Elektronik currently employs 470 people at its sites in Salzkotten in North Rhine-Westphalia and Neustadt in Saxony.

The Service Case ISOBUS contains the hardware required to perform diagnostics on Müller-Elektronik MIDI 3.0 job computers. This includes diagnostic of the ISOBUS as well as installation of software or configurations.

With the basic service vehicle harness, it is possible to operate a job computer and terminal without a tractor with ISOBUS basic vehicle harness. In addition to the Service Case, only the corresponding MIDI job computer, a terminal and a power source (socket) are required for this.

Software updates or configuration adjustments conveniently at your desk!

A diagnostic connector to which the supplied PCAN-Dongle can be connected is also available on the basic service vehicle harness. This makes it easy to perform software updates or configuration adjustments on a job computer at the desk.

Besides the basic service vehicle harness and the associated cables, two Y cables are also included that can be used for diagnostic on implements. These can be mounted in the tractor cabin between the terminal and the ISOBUS basic vehicle harness and connected to the PCAN-Dongle. The connection is made with the Sub-D and CPC connectors of our terminals. 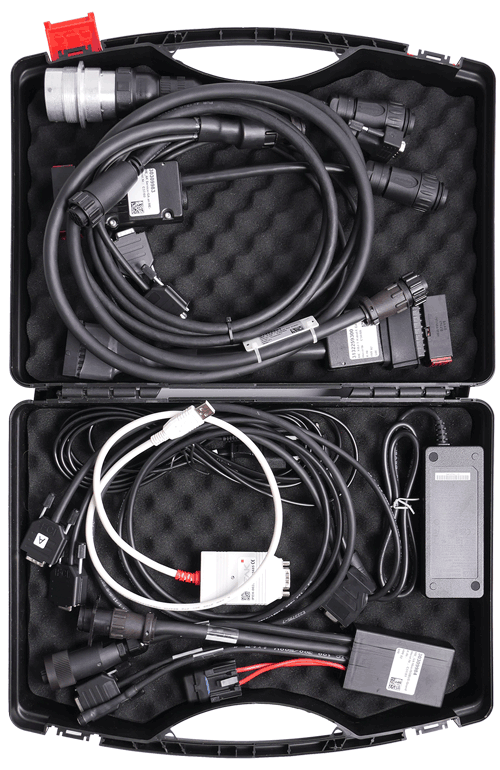